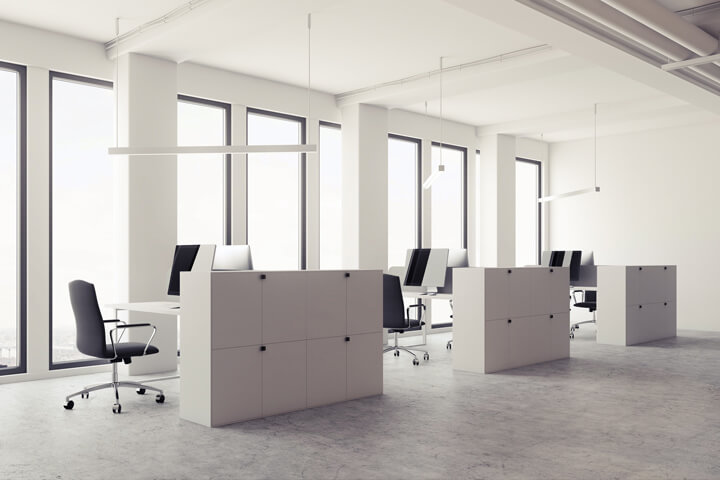 Once embraced as a unifying force, the open floor plans is showing its disadvantages.

Just a few years ago, it seemed as though everyone were falling in love with the exciting, collaborative environment produced by the open office. And, when contrasted with the cubicle, which is known to be dull, isolating, and claustrophobic, they did seem like the better option.

However, there appears to have been a recent backlash against open floor plans as more employees report being distracted, having higher stress levels, and becoming sick more often, all of which result in lower productivity. So, in spite of its aesthetic appeal, the open floor plan may not live up to the optimism with which it was first received.

This isn’t to say they’re all bad. Open floor plans still hold many advantages for businesses. They require less square footage, making them cheaper to rent. They’re also more flexible: if the number of employees in a space fluctuates, it’s easier to assign more or less space simply by rearranging the desks. With fewer walls to block the light, they tend to have more natural lighting, and it’s hard to shake the allure of collaboration that these environments are supposed to foster.

So, what’s the best choices for businesses? And if the open floor plan isn’t a great option, is there a better alternative to the cubicle? Let’s take a look.

For many workers, trying to complete a complex task amid the hubbub of an open floor plan is next to impossible. Even if the design were successful in fostering collaboration, most employees cannot collaborate all the time. At a certain point, they need to check out of the discussion to get their work done.

But with the excess noise, interruptions from colleagues, and distracting movement encroaching on their peripheral vision all day long, most employees can’t find the privacy they need to focus on their work.

Some businesses have addressed this situation by allowing employees more flex time or the ability to work remotely. Other solutions might include quiet work zones, or partial partitions. Either way, finding the balance between socializing and production will lead to her employee satisfaction.

One of the biggest selling points for the open office concept was the idea of the “culture collision” that happens when members of different departments get to work more closely with each other. By eliminating the physical walls separating teams, businesses could break down department barriers as well.

However, with the impact on productivity, constant collaboration might not be the answer. Instead, companies could look at ways to foster collaboration away from the desk, such as when employees take a coffee break. In fact, one company described in an article from Harvard Business Review found that when they replaced their small coffee stations that served an average of six employees with larger coffee hubs that served an average of one-hundred and twenty, their sales went up 20% the next quarter.

The takeaway here is that, while fostering interaction between departments is important, it doesn’t need to happen at the employees’ work stations.

A final disadvantage of the open floor plan is the higher levels of stress reported by employees who work there. Much of this could be the result of the way desks are configured in the Ann Arbor office space. When desks are pushed against a wall or a window, employees have to sit with their backs to the room, which contributes to a sense of being watched.

One simple solution is to change desks so that employees face inward. However, this doesn’t eliminate other stress factors, such as the higher noise levels and greater distractions which we mentioned earlier.

Furthermore, this solution doesn’t address the sense of being constantly observed. Employees feel watched because they are. While open floor plans are often touted for their transparency, that transparency comes at a cost. Employees in open offices often complain of a lack of trust, of feeling like their managers are looking over their shoulder while they work, or that coworkers are eavesdropping on their conversations.

One way or another employees need privacy to function, and they’re unlikely to find it in an open office.

Today, an estimated 70% of businesses use an open floor plan in their offices. Cubicles, which were the staple of office environments for decades, are now largely a thing of the past. But despite its popularity, the open floor plan might not be as much of an improvement as we would like to believe.

Instead of uncritically accepting open floor plans as the best solution to the cubicle, business owners should think about different ways to achieve the same benefits without compromising the privacy of their employees. One solution to that might be investing in larger offices that allow for more private work areas.

Larger floor plans obviously cost more money. But they could pay off in increased efficiency, greater employee well-being, and fewer sick days, which are some of the major hidden costs of the open floor plan. One study has shown that employees in open offices took 62% more sick leave than those in single offices. Another shows that office workers could be losing up to eighty-two minutes a day from distractions.

Providing a private office for every employee is probably an unfeasible solution. But a move toward smaller, shared offices with flexible areas for collaboration and private time might help.