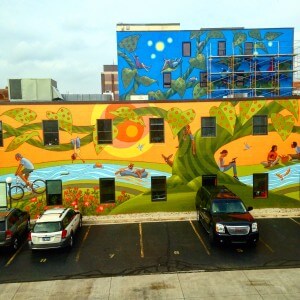 Oxford Companies and co-sponsor Magellan Properties held a mural dedication on October 21st to celebrate the completion of the largest public artwork in Ann Arbor.

The event commemorated the partnership that brought to life a 4000-square-foot mural, which spans the lower wall of Oxford’s downtown headquarters and continues four stories up the adjoining property owned by Magellan Properties.

“Creating Community” is the theme of the mural, which depicts Ann Arbor icons—a large tree, a lively river and a diverse mix of animated characters.  Local artist Cathy Gendron designed and executed the mural.  “Cathy has captured the heart of Ann Arbor in this mural. The work adds a new, unique focal point downtown and we are pleased to share this major public artwork with the community,” said Jeff Hauptman, Oxford Chief Executive Officer. “We are grateful to Cathy, Rene Papo of Magellan properties, and our four supporting sponsors who helped to make this happen.”

Oxford and Magellan commissioned Cathy, an instructor at the College for Creative Studies in Detroit, whose concept was chosen from 26 entries submitted by Michigan-based artists. Marsha Chamberlain, former President/CEO of the Ann Arbor Art Center, was hired as a consultant to publicize the competition and reach out to artists state-wide. A panel of artists and business professionals unanimously selected Gendron as the winner.

Domino’s, Atomic Object, the Ann Arbor DDA and Raymond James partnered with Oxford and Magellan to create the mural and further enhance downtown Ann Arbor as a destination.

Mlive coverage of the event: http://www.mlive.com/business/ann-arbor/index.ssf/2015/10/mural_painted_on_the_side_of_d.html